This is the tenth (and final) instalment in my biography of George Jennings Collis, but – now that he has arrived at Evenwood, County Durham in 1908 – the story has come full circle. When I first began my research – in those early days before Google searches and online records – George had been something of a mystery. He’d simply disappeared from the records in his home town of Leicester. The one clue that finally nudged me forward was spotting mention in his father’s probate records to “George Jennings Collis of Evenwood Vicarage, Bishop Auckland in the County of Durham, Clerk in Holy Orders, the son of the said deceased…”. It was this reference to Evenwood which really put me on his trail.

Evenwood is a former coal mining village; the main pit, Randolph Colliery, was very much flourishing during George’s time there, employing over 1000 men at its peak in 1914. It was quite a move from his previous appointment in the market town of Morpeth, some 50 miles away.  Ancestry helps set the scene with the 1911 census, providing a snapshot of domestic life at Evenwood Vicarage. 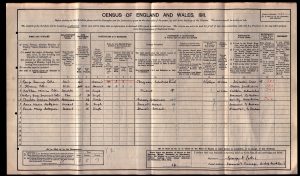 The life of a village vicar wasn’t so bad, it seems, as there are two domestic servants as well as a nursery governess for the three children. I decide to get in touch with the present incumbent, to see if I could find out more about George’s life and work in Evenwood; Rev Canon Jane Grieve refers me on to local historians, Roy and Val Proud and Kevin Richardson, who certainly come up trumps, providing me with a series of notes and photos. I’ll let Kevin take up the story with these extracts from his fascinating book ‘Evenwood Remembers’:

“The Parish was formed in 1866 and St. Paul’s Church was built at that time. It was restored 1890-01 but destroyed by fire in December 1907. The church was re-opened on Tuesday the 23rd March 1909 when the lesson was read by Mr. W. R. Innes Hopkins, managing director of the North Bitchburn Coal Company and father of W. Hustler Hopkins, chairman of the building committee. A public tea followed in the schoolroom. 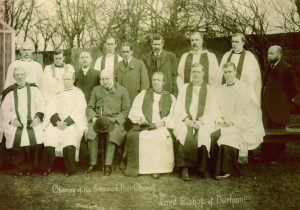 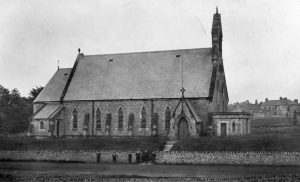 At this time Rev. G. J. Collis was still the relatively new vicar and no doubt relished the challenge of building up his congregation in his newly built church. Perhaps the Evenwood Parish Magazine would be a valuable tool in “spreading the word”. His curate until July 1911 was Rev. A. Armitage who resided at Victoria House and his choirmaster was Mr. J. R. Bouch. Mr. Bouch was the schoolmaster at Evenwood National School and the honourable secretary of the Evenwood Crusaders football team – clearly, he was an active member of the village community but he departed on being appointed Headmaster at Eaglescliffe National School in the Spring of 1912. 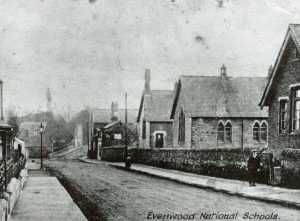 Rev. W. T. Taylor was the replacement curate who came into the village in March 1912. Rev. Taylor appears to have been instrumental in forming the Boy Scouts movement and by September 1913, there were 20 boys in the Evenwood troop.

The Church Magazine was well established by this time and communicated local information throughout the Parish. Details of births, marriages, burials, church services and secular matters were provided but also many other topics were brought to the attention of readers such as local events, presentations, meetings, sporting occasions, educational achievements, schooling matters… such as the Evenwood Silver Band winning the Boothroyd Challenge Vase at Bishop Auckland in 1910. Rev. Collis is included in the 1908 photograph of the prize winning band assembled outside the new vicarage at Shirley Terrace. 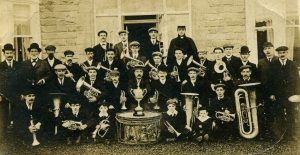 1908: Rev Collis (back row, standing at the right-hand end) with the Evenwood Silver Prize Band, Winners of the Hunwick Cup

Also the exploits of the village football teams enjoy good publicity in the magazine. For instance the league winning Evenwood Crusaders and junior teams are mentioned in May 1909, June 1910 and November 1911. Again Rev. Collis takes pride of place alongside his friend Mr. J.R. Bouch, the village school headmaster, in team photographs. Clearly, Rev. Collis was a “man of the people” and involved himself in various aspects of village life and reported many cheerful events in the magazine. 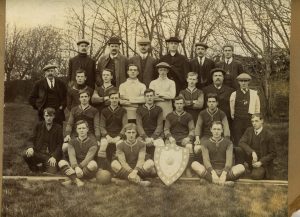 The Church Magazine probably was as effective as any other broadsheet or newspaper during the years of the Great War. Rev. Collis gave his opinion as to the progress of the war, trying as would be expected, to paint a “rosy picture” in times of crisis and being as patriotic as the occasion demanded. The magazine also provided an outlet for letters from men on active service away from home. It was passed around, home and abroad and voluntary subscriptions were forthcoming and acknowledged. There can be little doubt that its readers valued the publication.

Rev. Collis offered himself for the war effort but was denied service as the following extract from the Parish Magazine (July 1918) confirms:

“I have three times offered myself at various times during the war for any National Service to which the Diocesan authorities might care to appoint me and have been three times informed that they considered that the best form of service I could render was in my own parish among my own people.”

Perhaps the manner in which Rev. Collis kept his parishioners informed about these events is one of his best achievements. It is evident that matters of life and death, tragedy and sorrow are reported with great sympathy and tact. Perhaps the Diocesan authorities were correct in their belief that Rev. Collis should stay in Evenwood.

Sadly, in September 1918 as the war raged on, Rev. Collis passed away aged just 47. Mr. Spencer Wade provided a warm tribute to the Rev. George Collis who apparently had almost lost his sense of hearing and in August 1918 enjoyed a month’s holiday returning in September “refreshed and re-invigorated”. His appearance of good health was obviously masking serious health problems:

“In the sudden death of the Rev. George J. Collis, Evenwood has suffered a great loss. He was in every sense of the word a good man and good men in this sin stained world are few and far between…I was greatly struck while at Evenwood with the love of the young people for their vicar…Mr. Collis’ influence in Evenwood has been such that few men will be able to follow him.” 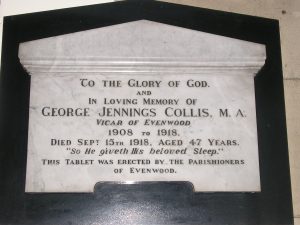 As well as this beautiful marble tablet inside the church, a headstone was erected in the local cemetery; Roy Proud kindly nips there to take a photo and transcribe the faded inscription. 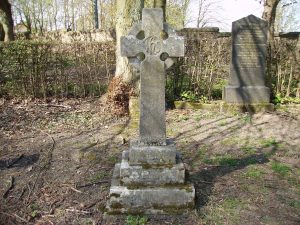 And so it is that the life story of George Jennings Collis comes to a close. I shall be reflecting in due course upon the process of writing a potted biography about a family member, such as I have done over this series of ten blog posts. But in the meantime I certainly now feel a much greater connection with George throughout his time – as a child at the North Bridge Inn, as a schoolboy servitor at Ardingly, up at Clare College Cambridge, and then through his clerical appointments at Berwick-upon-Tweed, Embleton, Morpeth and Evenwood. A remarkable man.

You can take a look at the full story here:

Counting noses and the whiff of bleach (1871)

Servitors and soxing at Ardingly (1881)

A summer of cricket with Wyggeston Boys (1889)

From Boston schoolmaster to Berwick curate (1894-97)

My considerable thanks go to Kevin Richardson for extracts from his book, Evenwood Remembers: 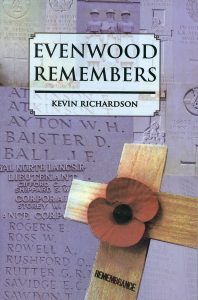 And to local historians Roy and Val Proud, and Rev Jane Grieve for putting me in contact.