After seven years at boarding school in Ardingly, George Jennings Collis is back in Leicester. It’s Thursday morning, 25th July 1889 and he approaches the stage at Wyggeston Boys’ School. It’s school prize day and he – along with Atkins [the son of the science master], Berridge and Forth – is being cheered by his fellow Wyggeston pupils for being one of “four of our number going to the Universities this year”. In October, he’ll be going up to Clare College, Cambridge.

As headmaster the Rev James Went points out, “Though Collis has not been here a long time, he has done excellent service, more especially in connection with the cricket team, and has been an efficient captain during the year. We shall be sorry to lose his services in the cricket field, but the University of Cambridge shall have the benefit of them, and we shall all feel that Collis has too much sense to go to Cambridge and devote all his time to cricket.” 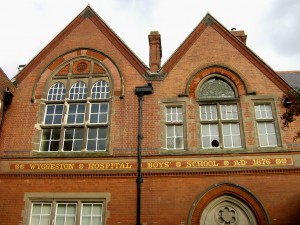 In 1889, Wyggeston Boys’ School occupies red-brick premises on Highcross Street, wedged between Peacock Lane and Town Hall Lane. The school has a long history – dating back to a bequest left by Elizabethan wool merchant William Wyggeston – but the present school buildings are Victorian; opened on 30th April 1877, and extended in 1884 with a new science laboratory wing along Peacock Lane. By 1889 there are 540 scholars and the school is “really a little larger than it was ever intended to be.” 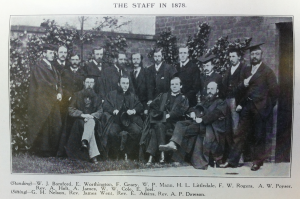 Secular instruction comprised “reading, writing, arithmetic, mathematics, geography (physical and political), history, English language and literature, Latin, at least one modern European language, natural science, drawing, and vocal music. Greek might be taught at an additional fee of not less than £3 a year for each boy.” 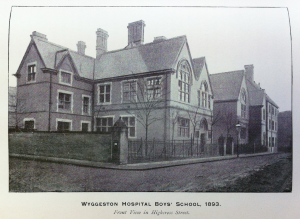 Quite why George moved back to Leicester, rather than complete his studies at Ardingly, is not clear. In 1888 his father had sold the Hinckley Road Brewery and retired – albeit briefly – to Evington Villas; so his father’s finances were in good shape, it seems, and well able to afford school fees. Maybe his father’s health was less robust and he preferred his eldest son back at home? Or maybe the reputation of Wyggeston School was now firmly established, and so it was a safer option than when they’d first chosen a school in 1880 for their bright, eldest son. We shall probably never know.

However, what is clear is that young George embraced the sporting opportunities at Wyggeston Boys; by demonstrating his skills at cricket and football he had a chance to quickly earn the friendship and respect of his new school mates. There was a school playground but, on the whole, Wyggeston Boys’ games facilities “for a long time were woefully inadequate. For many years the school had no playing fields of its own. Games were played on Victoria Park and attempts were made to secure a ground on the Fosse, on Belgrave Road, and near Evington Lane. At last [though slightly too late for George] in 1891, a field of about three acres was secured at the corner of Victoria Road and Lancaster Road.” 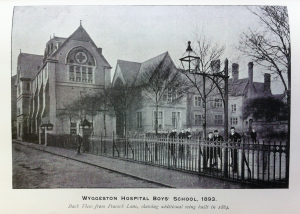 A couple of newspaper snippets provide further detail of George’s sporting endeavours; in May 1889 he helps to organise the school sports day, and in July 1889 he puts in a very respectable 63 runs – and takes a few  wickets – in a match between Wyggeston Boys past and present. 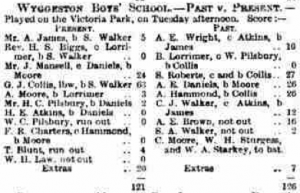 George is excited, and apprehensive, about going up to Cambridge in the autumn. But in the meantime there are the summer months to enjoy, playing cricket with Pilsbury, Atkins and the other Wyggeston Boys. This contemporary photo of a cricket team posing by the pavilion in Victoria Park evokes a sense of time and place. 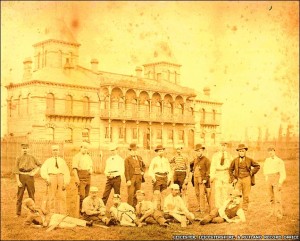 Books at the Society of Genealogists: The History of Wyggeston Hospital and Schools (George Cowie, 1893) and Wyggeston School Jubilee 1877-1927 (published by Widdowson & Co, 1927).

1 thought on “George Jennings Collis: a summer of cricket with Wyggeston Boys (1889)”