After three years service in Berwick Upon Tweed, George moves 40 miles or so southwards along the Northumbrian coastline, to settle as curate of Holy Trinity Church in Embleton village. 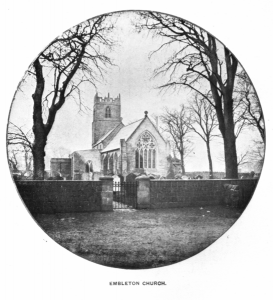 He’s following in the footsteps of many notable and literary incumbents in the parish. Most famous of all was the Rev Mandell Creighton, the vicar of Embleton in 1875-1884 who later became Bishop of London. It was whilst at Embleton that Creighton wrote his History of the Papacy, The Life of Sir George Grey, and collected material for the Northumberland County History, of which he was one of the founders.

Creighton’s daily routine provides an insight into the life of a late Victorian clergyman. Each weekday morning, he spends four hours reading in the vicarage library. In the afternoons,  he visits – with his wife, when possible – the homes of their parishioners, listening to them, giving advice, offering prayers, conducting services for the housebound, and, on occasion, handing out home-made medical remedies.

Embleton parish consists of a handful of villages and approximately 1700 inhabitants, among whom are farmers, whinstone quarrymen, herring and haddock fishermen, women workers in fish curing yards, and railwaymen. The Creightons judge their parishioners to be reserved, proud and independent, but lacking in morals:

“In many ways the moral standard of the village was very low, and it was a difficult place to improve. There was no resident squire, the chief employers of labour were on much the same level of cultivation as those they employed, and in some cases owned the public-houses and paid the wages there.”

It is into the Creightons’ shadow that George Jennings Collis arrives as curate. Holy Trinity is an interesting church “and its outstanding features are the old stone porch and the 14th century tower, with rare trefoil openings in its battlements…. The five windows in the sanctuary are a reminder that this was the church of the Greys of Falloden.” [King’s England: Northumberland]

Architecturally speaking, it isn’t so much the church as the vicarage that’s remarkable – a fortified pele tower built in 1395 to protect its occupants from marauding Scots. “The vicarage is one of the few fortified vicarages left in Northumberland. It retains an grand and rugged pre-Reformation tower. Close by is a ruined 18th century dove-cot built of brick, and not far away is an older one of stone.” 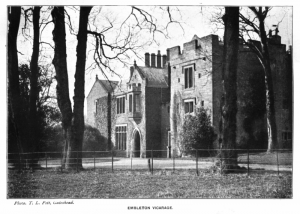 Alas, as the curate George doesn’t live in the imposing vicarage, though undoubtedly he spends much time there. Instead we find him in the 1901 census living in a more modest setting – Fallodon Cottage, with his wife and two daughters. Life is still comfortable, with a teenage housemaid and children’s nurse on hand to see to their domestic needs. 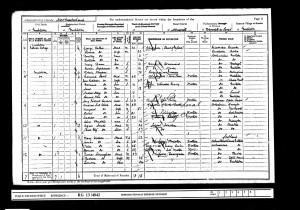 It’s a beautiful place to work and live. Short streets criss-cross one another in the village, and the old-fashioned Bluebell Inn and the much grander Dunstanburgh Hotel are close by (as well as the local chapter of the Church of England Temperance Society, established by the Creightons).

Embleton Bay with its sheltered sands lies only a mile from the centre of the village. When he’s not busy with parish business – conducting sermons, speaking at the village school, or visiting the sick – George takes Florence and the girls for a stroll along the beach. In spring, cowslips and bluebells grow together among the bracken on the sandhills – a combination found nowhere else in Northumbria – and Florence identifies burnet roses and bloody cranesbill too. Dunstanburgh Castle stands at the southern end of the bay, and just beyond is the fishing village of Craster, well known as a base for fish-curing (George is rather partial to a Craster smoked kipper for breakfast).

There’s time too to purse his passion for cricket; he plays for Embleton in the Alnwick and District League from time to time. And occasionally he’s invited to tea with the Bishop – a cup or two of Earl Grey perhaps, given the Grey family’s local connections. 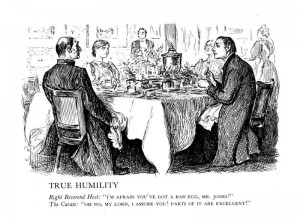 Let’s hope the boiled eggs were OK; a Punch carton of the time (November 1895) by George du Maurier depicts a tea-time vignette, with the bishop saying: “I’m afraid you’ve got a bad egg, Mr Jones.” The curate replies, desperate not to offend his eminent host and employer: “Oh no, my Lord, I assure you! Parts of it are excellent!” And so the phrase ‘the curate’s egg’ came into being; finding the good in something that is mostly or partly bad. 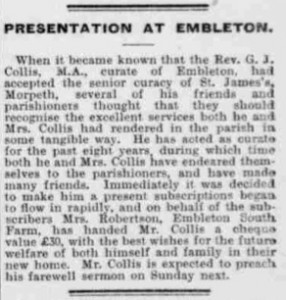 As 1905 starts, it’s time for another move; George has secured a new appointment. During eight years as curate at Embleton, “both he and Mrs Collis have endeared themselves to the parishioners, and have made many friends” and a whip-round among the congregation raises £30 as a farewell gift. In February 1905, George preaches his last sermon at Holy Trinity and takes up an appointment as senior curate of St James’ Church in Morpeth.