It’s not always a good idea to start family stories at the beginning; it can often be more intriguing to start elsewhere. Having said that, a life story told in weekly blog instalments has scope to get a little confusing if it doesn’t follow some kind of chronological order. So, at least for the time being, let’s follow convention and begin at the beginning, on a winter’s day on the cusp of 1870-1. In a room over the North Bridge Inn, Emmeline Collis is in labour. 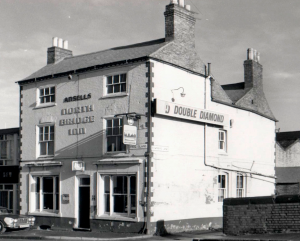 The North Bridge Inn stands in Frog Island, beside a lock-gate on the Leicester Navigation. Horses clip clop their way along the towpath, pulling barges laden with coal on their journey between Loughborough and Leicester. And on the road outside, carts and pedestrians arch over the canal bridge as they head into town.

In December 1870, licensed victualler John George Collis – always known as George – and his wife Emmeline have lived here for only a month; 1870 has been a busy year for them: in July they’re running the Sir Thomas White pub in Russell Street, by October they’ve moved to the Red Lion on Highcross Street, and then finally in November they swap licences with John Cooper for the North Bridge Inn. Such energetic hopping around – finishing at Frog Island – is reported in a series of newspaper clippings, ending with this one from the Leicester Chronicle and Leicestershire Mercury on 19 November 1870:

George Collis is an enterprising and energetic man. In the daytime he works as an engineer and, come the evening, he’s serving beer as a pub landlord. He hasn’t always been commercially successful however – some eighteen months ago, in June 1869, whilst operating as an “Engineer and Dealer in Flour and Corn” at 31 Sanvey Gate he was adjudged bankrupt. Flour and corn dealing had been a diversion, and a bad one at that; within a couple of months he was able to clear the debts and lift the bankruptcy, yet the experience still dwells with him.

The pub trade, on the other hand, is familiar territory to George Collis – after all, he’d spent much of his childhood living at the Foundry Arms and Dixie Arms. His latest transfer to the North Bridge Inn is a wise move, he reckons, given the amount of passing traffic. Sales particulars in the newspaper reveal it’s a substantial establishment:

And so it is in the closing days of 1870 that we find Emmeline in childbirth in the back bedroom. This is not her first baby – there are two girls already in the household, Cary and little Emmeline. And in the summer of 1866 they’d also had a son Alfred Jennings Collis; poor little Alfred had perished at only 19 months old.

Pregnancy and childbirth is a female domain; the local midwife is called and Emmeline’s mother, Louisa Jennings, is in attendance. Women and doctors regarded childbirth as an illness. “Naturally these times are looked forward to with dread by all young wives,” wrote Mrs Panton in her guide to young married couples, From Kitchen to Garret (1887). In The Victorian House, Judith Flanders continues: “The lower middle classes… did not have the servants to permit them to lie in bed for weeks (or even days). And it was they – overburdened with heavy housework which they performed themselves, and with the care, feeding, clothing and education of children – who would probably have benefited from time in bed.”

On top of the day-to-day chores, Emmeline has had to organise the recent household move. And the girls’ excitement at Christmas has compounded her exhaustion. She’s relieved when, on Tuesday 27 December 1870, her new baby boy comes safely into the world.

They decide to name him George Jennings Collis, a name that nods to both sides of the family: ‘George’ after his father’s father and ‘Jennings’ after his mother’s family name. With a new home, a new baby son, and a new year about to start, things are looking promising for the Collis family.

The Victorian House by Judith Flanders