Sunday 16th December 1894. It’s a chill winter’s day in Newcastle. George Jennings Collis is preparing for his ordination at the Cathedral. It’s a big move, in a grand building, yet George is certain this is the pathway determined for him; he’s rock steady in his Christian faith. 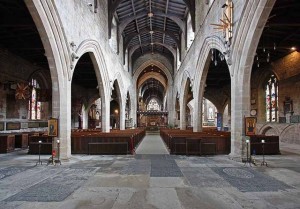 The Bishop of Newcastle – Ernest Wilberforce – officiates at the proceedings. Having taken holy orders, George is ready to start his new life as a curate in Berwick-upon-Tweed, Northumberland. Prayers are said to bless him in his work. George’s fiancé Florence Ingamells smiles over to him from the front pew. The choir sings heartily as the procession parades out of the Cathedral.

Being a curate is not George’s first job after graduating from Clare College; two newspaper snippets from the Stamford Mercury reveal that he’d spent some time – a couple of years – as a master at Boston Grammar School. A cutting from November 1894 records his move from the school:

Whilst in Boston, he’d not only been teaching; he’d started courting a local woman, Florence Ingamells. She’s the youngest daughter of Charles Ingamells: a one-time chemist, temperance advocate, suspected forger, and editor-proprietor of the Boston Independent newspaper (undoubtedly a colourful character but that, as they say, is another story).

How to find out more about George’s life in the church? I go to Ancestry in search of Crockford’s Clerical Directories. Since the first edition in 1858, Crockford’s has been the definitive handbook of the Anglican clergy. As the preface to the 1908 directory points out “It is gratifying to the individual Clerk to be able to turn to the page of a book such as this in which his name may have stood for a long period as the Parish Priest of one place and review the hopes, aspirations, parochial efforts and successes, not unmixed with disappointments, of a lifetime.”

Six volumes of the directory are now available at Ancestry, spanning from 1868 to 1932. I delve into the 1898 edition. 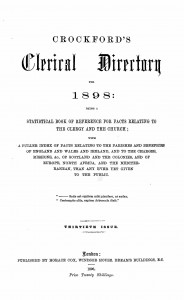 From amongst more than 2250 pages of tightly-packed biographical and parish information about Church of England bishops, vicars and curates – throughout the United Kingdom and beyond – there’s the brief biography of George Jennings Collis:

The directory listing shows him serving as a curate in Berwick-upon-Tweed. Having been ordained as a deacon (“d 1894”), the Reverend George can now lead church services, funerals and baptisms. A year or so later he’s ordained as a priest (“p 1896”) – enabling him to conduct services of Holy Communion, blessings, and absolve people of their sins.

Holy Trinity in Berwick-upon-Tweed is a remarkable church, one of only a handful built – without a spire – during the time of the Commonwealth and holding a commanding position within sight of the North Sea. The town itself is also historically significant – located at the northernmost point of Northumberland, on the border between England and Scotland; it had long been a place of transition. 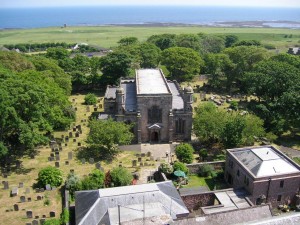 As David Brenchley writes in ‘A Place By Itself: Berwick-upon-Tweed in the Eighteenth Century’: “Berwick and the land within its bounds formed a single parish, centred upon the church of the Holy Trinity. The church had been rebuilt during the Commonwealth and, without a tower or steeple and tucked away in the north-east corner of the [town] walls, would have been easily missed by the traveller passing through the town. Even at the time of its buildings its size must have precluded many of the population from simultaneous attendance at its services even if they were standing. Its seating capacity today is 450. In the eighteenth century with additional galleries it might have accommodated about 1000, far fewer than the population of the town… The church itself was notably plain inside as well as out, without an altar or stained glass.”

The clerical team at Holy Trinity, as listed in the 1898 Crockford’s, is led by vicar Henry Bernard Hodgson. Hodgson has only just arrived in the parish but is eminently qualified with a first class degree from Oxford and a clutch of previous clerical appointments. George is too junior to be considered for the role of vicar, but after three years in Berwick he reckons it might be time to move on; a meeting with Rev Hodgson and the Bishop has brought to light a new opportunity. George now prepares for a move some 40 miles southwards to Embleton.