In late Victorian Leicester, you’d generally find my Collis ancestors pulling a pint or working in wood, earning a living as either publicans or engineers’ pattern makers. So I was surprised to find George Jennings Collis listed as a “Clerk in Holy Orders, of Evenwood Vicarage, Bishop Auckland in the County of Durham” in his father’s prob 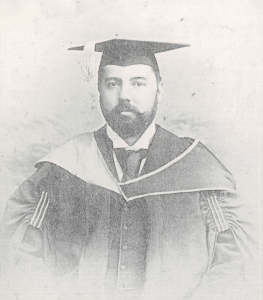 ate records. He was an exception to the rule, it seems, and worth a closer look.

Over recent months I’ve been piecing together cousin George’s story, with support from local historians in County Durham and some resourceful searching. To tell the full story all at once would be a bit of a marathon – and far too long for a single blog post – so instead I’ll be sharing it in weekly instalments.

Publishing in instalments was a technique favoured by Dickens, as this British Library piece explains. I don’t pretend to share Dickens’ literary flair, or have the dramatic plot and remarkable characters of David Copperfield or Hard Times, but I’m nevertheless keen to experiment and see how it works for family history writing.

At this stage, I’m not sure how many blog posts his story will need; I can see the horizon, so to speak, but I’m not quite sure how I’ll get there. In any event, it isn’t a sprint and let’s hope we enjoy the journey along the way, week by week. To whet your appetite – and introduce George – I’ve started with this rather splendid photo of him graduating from Clare College, Cambridge in 1892.

As we progress, I’ll add in links below to other blog posts in the series to make it easier for you to hop around from one instalment to the next.

Counting noses and the whiff of bleach (1871)

Servitors and soxing at Ardingly (1881)

A summer of cricket with Wyggeston Boys (1889)

From Boston schoolmaster to Berwick curate (1894-97)