Victorian London in Photographs: a free exhibition at the London Metropolitan Archives (5 May-8 Oct 2015)

If you’re visiting the LMA to carry out research, or you find yourself in the Farringdon area with half an hour to spare, then take a look at the Victorian London in Photographs exhibition on the first floor. 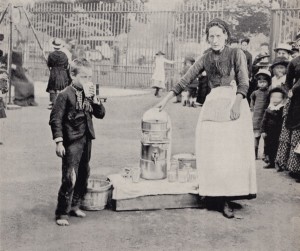 It’s a wide-ranging topic for a small gallery space, but this carefully curated selection gives a glimpse of how photography was used by Victorians to record life in London: its architecture, streetscapes and residents. Here are just three of the selections you have in store.

Sherbert sellers and street musicians: on your way up the staircase there’s a series of street vendor photos taken between 1884 and 1887 around Greenwich. They were commissioned by Charles Spurgeon who had recently taken over the South Street Baptist Chapel; he planned to use them as lantern slides, presumably as the basis for a lecture or two. Together they convey the breadth of goods and trades once hawked around the streets. In one (above), a sherbert seller quenches the thirst of a shoeless boy who appears in several of the photos – one hopes he was given a few pennies and the odd sherbert as he accompanied the photographer on his rounds. Other images depict a celery salesman, street musicians, a ‘try your weight’ machine, and two youths selling crockery from a cart outside the London & Naval Hotel (“White Bait and Fish Dinners, Hot Joints and Poultry” proclaims the hotel signage, “Try Our Shrimps in the Garden. 9d.”)

The Crystal Palace reconstructed: a series of images by Philip Henry Delamotte document the reconstruction of the Crystal Palace when it was moved from Hyde Park to south London a couple of years after the Great Exhibition of 1851. As the (free) exhibition booklet explains, it’s one of the earliest instances of “photography to record a large-scale engineering project, capturing the full process over a two year period. Alongside his beautiful images of the exhibits, from Roman courts to fighting leopards, he also shows us workmen and artisans installing casts and stonework.” In one photograph, a group of workmen take a break, enjoying breakfast time outside the new building. 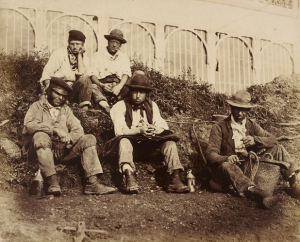 Society for Photographing Relics of Old London: in 1875 a group of like-minded gents came together to record parts of London’s landscape threatened by redevelopment. It was more an “awareness raising” and documentary activity, rather than a preservation lobby, but their photos serve as an invaluable record of lost London. They’re also beautifully composed: a solitary figure stands in the archway of the Oxford Arms; on Fleet Street, a short-hand school sits over a fish shop selling Whitstable Natives;  and the Singer’s Sewing School nestles in the Aldgate Shambles. All may have disappeared, but the LMA’s Collage online database offers a chance to take a closer look at these and many other images of London.

Emotionally charged portraits scroll through on screens alongside: images of sombre London boys awaiting emigration to Canada, and portraits of bewildered patients at the  Colney Hatch pauper lunatic asylum. And throughout the exhibition, you’re overlooked by a crowd of top-hatted gentlemen and children leaning on the ironwork of Shoe Lane Bridge in 1869.

If you’re not able to visit the exhibition, fear not, you can at least take a look at the Greenwich street vendors in this Spitalfields Life blog post. If you have any street sellers in your family tree then these photos might help you develop a picture of their working lives.