It’s the afternoon of Thursday 10th April 1930. A stage-hand leads the way around the back corridors at the Adelphi Theatre on London’s Strand. With a brisk rat-tat-tat on the principal dressing room door, he announces “Miss Courtneidge, I have Mr Tom Crew to see you.”

Tom is ushered in to meet singer and comic actress, Cicely Courtneidge – she and her husband, Jack Hulbert are West End stars, soon to hit it big as film actors. And so it is that Tom Crew settles down to a chat over tea, during which the actress presents him with a silver referee’s whistle in readiness for the FA Cup final taking place two weeks later.

I’d known for some time that Tom Crew – a distant relative of mine – had been a football referee of note; he was mentioned in our passed-down family stories and there’s a small photo of him in his referee’s kit amongst our family papers. But could I find out more about his career on the football field, I wondered? I turn to the British Newspaper Archive (www.britishnewspaperarchive.co.uk) in the hope that he merits a mention in the press. It proves to be a fruitful search.

Before dipping into old newspapers though, I remind myself of Tom Crew’s back-story. Born in 1883, he was the eldest son of Edwin Crew and Jane Preston. His earliest days are spent in Chorley, Lancashire, where father Edwin sets up as a printer and stationer, and later starts the Chorley Weasel, “a local political and social journal of current events”. By the summer of 1889, after a brief sojourn in Buxton, the Crews settle in Leicester as Edwin joins the Midland Free Press. He progresses to become the newspaper’s proprietor but the family – including young Tom and his three siblings – continue to live modestly amidst the tight terraces of Biddulph and Chaucer Streets in Highfields. In his spare time Edwin – a remarkable man who needs his own story told elsewhere – devotes enormous energies towards the Wycliffe Society for the Blind and the Loyal Order of Ancient Shepherds friendly society.

So far, so good, but now it’s time to see if the newspapers can reveal more about Tom Crew’s footballing connections. It isn’t long before – bingo – I track down a snippet about his retirement (1934), which includes an outline of his career, initially as a player and later as a referee:

Records of him playing for Leicester Fosse, Luton and Worksop are scant but from the outset it’s clear that he was a capable sports organiser and campaigner. Athletic News (1911) reports “The Leicester Cricket Club have just returned from a successful tour into Germany, which was organised by Mr Tom Crew. Four matches were played, and all won by the English team by an innings and over 100 runs.” Other cuttings show him arranging social events for the Wycliffe Society for the Blind (1911) and – professionally speaking – he delivers lectures during WWI as Secretary of the Leicestershire Health Insurance Committee on preventing tuberculosis and the merits of canned food.

As a referee, he initially oversees local and regional matches, before progressing to the FA Charity Shield, the Dewar Shield and “international matches in Scotland, Wales, Ireland, Germany, Holland, Belgium, France, Switzerland, Spain, Austria and Hungary.” Three match reports stand out from the crowd:

December 1926: “Leicester is the favoured football centre of the season. On Saturday it receives the first all-amateur match between England and Scotland since March 1885… Lucky Leicester! It has even got the amateur international referee – a tribute to Mr Tom Crew that is thoroughly deserved… It is expected to draw a great “gate” and is not likely to disappoint any of its patrons.” (Athletic News)

April 1930: In front of a crowd numbering over 92,000 at Wembley Stadium he referees the FA Cup final, in which Arsenal are victorious (2-0) against Huddersfield. “It was a treat being out there controlling a good representative display worthy of the best traditions of English football”, said Tom Crew, “I was taken aback somewhat by the calm, coolness, and apparent absence of hysteria on the part of the players, who showed a respect for me and my decisions for which I am proud.” (Athletic News)

March 1931: “With an Englishman – Mr T Crew, of Leicester – as referee, France and Germany met at the Colombes Stadium on Sunday in the first Association football match between the two countries for 33 years… It is said that the crowd was the biggest that has ever attended a football match in France. Of the disorder prophesied by the pessimists there was not a sign. All racial feelings were under the sway of the great god of sport.” (Western Gazette) 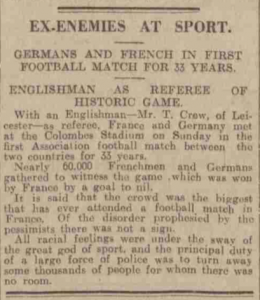 No doubt with a helpful steer from his journalist father, Tom proves adept at courting the media. In the style of modern day sporting celebrities, he answers ‘Problems of the Day, Put to Famous People’ in Athletic News (1927), and uses his notoriety to endorse Mansfield football boots – “I found the boots admirable in many ways, durable and flexible, and particularly easy to run with… I wore them in seven matches in eight days, and despite the bad weather conditions they came through successfully” (1930).

Tune into Midland Regional wireless on Saturdays at 10.00pm and you’ll hear him broadcasting ‘The Week’s Sport in the Midlands’, or flick through the Yorkshire Post in the early 1930s and you’ll spot his weekly column. In 1933, the Daily Mirror promises football commentary from “The Big Three… who put life into the game and punch into your football reading,” comprising “T Crew: the famous Broadcasting Referee, [who] gives the game from the Ref’s point of view” alongside Chelsea manager, Leslie Knighton and Arsenal player, Clifford Bastin.

As “one of the most studious referees of the day” Tom is keen to maintain and extend professional standards in football – not least as founder secretary of the Association of Football League Referees and Linesmen. He readily shares his opinion in the sports pages, week after week: “Now that players are settling down to the new off-side law, I am pleased to note that there is closer study of tactics” and “The advantages of a system of [secret] signalling that gives a referee the decision of the linesman without the knowledge of the teams or public is frequently useful”. Perhaps most memorably, in one of his many evening talks, he opines that a referee needs “the mentality of an encyclopaedia, the patience of Job and the wisdom of Solomon.”

Piecing together clippings from the British Newspaper Archive has been a revelation. Starting with only sketchy information, I now have a more colourful and nuanced impression of Tom Crew; he was not only an accomplished professional but also a humorous raconteur and – most importantly – a man with a great sense of fair play.