In our latest Trading Stories, Working Lives article, we use the 1750 inventory of George Waldram to get a better understanding of life as a yeoman farmer.

“And including this top shelf we have 109, 110… that’s 111 cheeses in all, by my reckoning,” says John Collishaw as he finishes his counting. He’s standing in the cheese room at Waldram’s farm in Barrow upon Soar. It’s slightly dank in here, with a pungent aroma filling the air. Resting on a wooden chest in the corner, Joseph Haddon, his fellow appraiser, carefully adds to his list the number of cheeses and ascribes them a value of 14d each. After a discussion, they nudge that down to 12d apiece, which he carefully over-writes in heavier ink strokes before totalling them – with perfect arithmetic – at £5 11s. 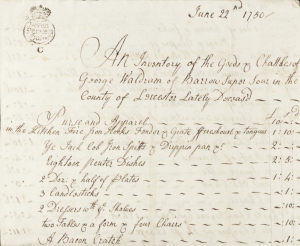 Leicestershire wills and inventories – along with an extensive collection of parish registers and poll books – have recently been uploaded at Find My Past. I dig in and quickly unearth George Waldram’s documents. His will makes an interesting enough read – there are properties in Laughton and Humberstone to hand on, £100 bequests to each of his children, an annual allowance of £20 for his widow Anne, and the residue of his estate is left to eldest son, George – but it’s the room-by-room inventory that adds the real colour. 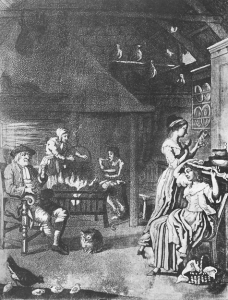