In recent days of self-isolation, with more time than ever spent at home, I’ve found myself reflecting upon what might broadly be called heirlooms – objects around the house that were once owned, or created, by an ancestor that have somehow worked their way into my possession. None of these objects is intrinsically valuable, yet each carries with it a story from the past. 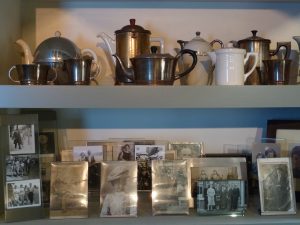 Inspired by The Pulse Glass – a book by Gillian Tindall that was serialised recently on Radio 4 – I’ve decided to take a closer look at heirlooms in a series of blog posts over the coming weeks. “Most of the objects that surround us, no matter how important in their time, will eventually be lost and forgotten,” writes Tindall, “But a select few, for reasons of sentiment and chance, conservation and simple inaction, escape destruction and gain new meanings.”

An ‘Heirloom’ is a term first used under English law to denote a chattel, most often a tool, that formed part of an inherited estate.  The owner of an heirloom could dispose of it whilst alive but was only able to bequeath it in death to his or her heir-at-law. It was a means to help keep estates intact, under the watch of law. These days, the term heirloom more often conjures up images of valuable jewellery or antique furniture – not particularly ‘looms’ or tools.

With so many weavers and framework knitters among my ancestors I was hoping to find mention of a loom being bequeathed in a family will – as an heirloom, so to speak – from one generation to the next. Alas, references to looms were thin on the ground, but some of the earliest wills in the family refer to various tools and other chattels. Take, for instance, the 1750 will of yeoman farmer George Waldram of Barrow upon Soar in Leicestershire, sourced from Find My Past. The will itself refers only to money, land and property but the inventory prepared by George’s appraisers provides a three-page list of his household furniture and effects, his tools, animals and crops. It’s a fascinating insight into the working life at the farm. 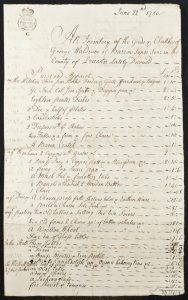 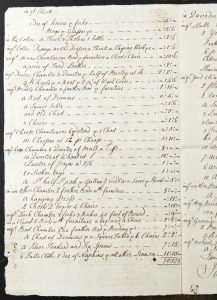 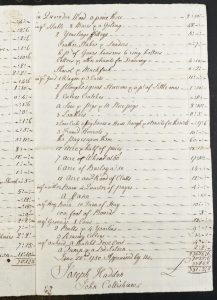 Goodness knows what has happened to all of George and Ann Waldram’s furniture, tools and household items. Most will have perished or been thrown away over the years. But perhaps smaller items might have survived, one way or another – who knows, maybe the 3 Candlesticks from ye kitchen, the Looking Glass from ye hall parlour, or the Silver Tankard and Six Spoons from ye best chamber have been passed down as heirlooms to the present day? We shall probably never know. Click here to read more about George and Ann Waldram, yeoman farmers.

For the next blog post on Heirlooms I shall be looking again at tools, and specifically a pattern-maker’s tool chest that has been passed down from my great grandfather. And whilst I’m doing that, I’d encourage you to look around your own home and start compiling a list of objects – large and small, treasures and trinkets – that embody stories about your family history. Let’s shape and share those stories together over the coming weeks.