Every autumn, when I buy a new diary for the following year, one of the first fixtures to jot down is the three-day Who Do You Think You Are? exhibition. It’s become a firm fixture on the family history landscape, an event not to be missed. This year, WDYTYA? Live (7-9th April) celebrates its 10th anniversary and I’m looking forward to it as much as ever. 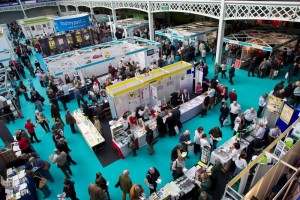 These days it entails a trip to the NEC in Birmingham. For those of us based in the Big Smoke it’s perhaps not so handy as the previous venue at London’s Olympia, but the journey pays off; it’s now the world’s largest family history show, attracting some 13,000 visitors. It’s an invigorating mix of over 130 exhibition stands and 90 talks: dip into some newly-released records or publications, take along your old family photos or heirlooms to be explained, and get fresh ideas on how to overcome your brick walls. Who knows, you might even rub shoulders with historian Sir Tony Robinson, antiques expert Eric Knowles, or Anita Rani, one of the latest WDYTYA subjects.

Over the coming weeks, I’ll be highlighting some exhibitors and talks that might be of particular interest to those looking to write their family history. To help set the scene in the meantime, I’ve included below an article that I wrote after volunteering as an advocate for Ancestry at a previous WDYTYA? show. Not knowing what queries would turn up next meant it was a thrilling, rollercoaster kind of day helping fellow family historians progress their research. So, hold on tight, and here we go…

“My mother always said we were related to a mayor of Cape Town in the 1930s, can we find out more about him?” It’s a slightly exotic enquiry from my first visitor at the Who Do You Think You Are? Live show, and it yields some colourful snippets. Within about 10 minutes, we’ve tracked the future mayor, Louis Gradner, on the census and passenger lists – from his childhood in the heart of Spitalfields, the son of a Russian slipper maker, to becoming a prosperous accountant in South Africa, sailing first class between Cape Town and London, with his wife and two daughters. 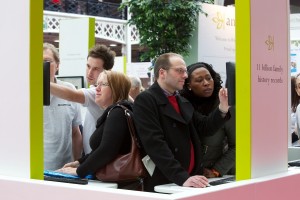 It’s an exciting start to my first session as an Ancestry Advocate. Along with a group of other enthusiasts, I’m helping fellow family historians to track down their ancestors. Five or six of us Advocates are darting between the terminals in the ‘look-up’ area of the stand at Olympia, listening to visitors’ queries and giving them a helpful steer.

An elderly couple approach me, clutching a treasured WWI photograph of three uniformed servicemen. “Aunt Polly wrote a note on the back,” the lady explains, “which suggests that this man with the gun was Alfred Hubbard.” We track him down to pre-War Staffordshire, the search made easier by his brother handily being called Horatio. Hot on its heels, another military connection follows for the next visitor – this time leading us to a Wheel Major in the Royal Artillery, stationed at Woolwich Barracks in the 1880s.

By lunchtime, the Ancestry stand is a hive of activity, buzzing with discoveries.  The Advocates flit from one terminal to another, sharing their ideas and top tips for searching. I wander over to a mother and daughter, who explain their challenge. “We’ve been looking for Henry William Rawlings for the last ten years or so, but we can’t seem to find him in the census.” As family historians, we can all empathise with the frustration when the trace goes cold on a sought-after ancestor. This one needs a bit of creative thinking and some persistent searching, but eventually we track down young Henry, listed by the enumerator as ‘son-in-law’ but actually a step-son after his mother had remarried. It’s one of those Eureka moments. Now we’re on a roll, and track Henry’s mother in her younger days, a true Cockney, born on Cheapside and later a servant in Lombard Street, in the heart of the City. Mother and daughter look at each other, and then at me, a little overcome by what we’ve unearthed.

From London City I next hop across the Atlantic. “My grandfather was a GI – oversexed, overpaid and over here,” smirks the next visitor. Could he have a look at the US records on Ancestry? We’re soon marvelling at the extensive detail that the US census yields about his grandfather and beyond. We discover that his great grandparents were born in Rhode Island and Vermont, but that the previous generation had sailed from Ireland, England and Sweden. “With a name like Kelley I’d presumed we’d got Irish roots, but Swedish too, now that’s a surprise!” Next stop he’s off to look at the Genline archives that Ancestry has recently acquired in Sweden.

It’s approaching 6 o’clock and the show is starting to thin out. But my interest is sparked once again when a lady down from Yorkshire for the weekend mentions a family bible.  “I’ve pieced together the names from the bible, but can we take it back a bit further?” Soon were darting around the Worcestershire-Gloucestershire borders, 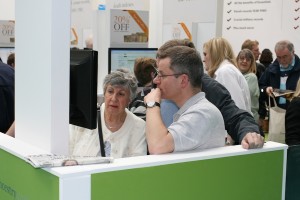 honing the family down to the village of Childswickham, with its evocatively named Isle of Nabby and China Square. We discover three generations of ‘ag labs’ in quick succession, and a swift hop onto Google Maps confirms that Whitechaple Farm – where her ancestor worked with the owner and 5 other labourers, tending the 260 acres – is still in existence. “Now I want to organise a trip to the Cotswolds, to see where he lived and worked over 150 years ago,” she beams.

It has been a fascinating day, helping fellow family historians to progress their research. There have been some tricky challenges – good practice at problem solving, even for old hands like me – but all of the people I’ve met have left with some new insights into their family. And with such a colourful mix of stories – from South African mayors and American GIs, to Cockney girls and Cotswold ag labs – it reminded me how rich and rewarding family history can be.

With thanks to my friends at Ancestry for permission to re-use this article.