For our next Trading Stories, Working Lives article we piece together the lives of two sisters – Mary Jane and Clara Bramley – in their work as school mistresses and governesses.

It’s a fresh January morning in 1868. Let’s stand on the junction of Union Street and Freeschool Lane, a few steps north of the High Street in Leicester. Steam-powered spinning machines hiss and rattle at Fielding Johnson’s Bond Street Mills over the road. A horse clip clops past, pulling a creaky cart laden with market produce. 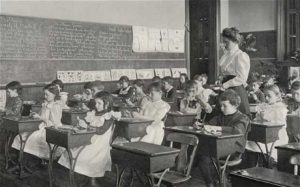 Now listen very carefully outside the corner house; children are chanting in unison “… 2 times 6 is 12, 3 times 6 is 18, 4 times 6 is 24…” Push open the door and peer inside. Miss Clara Bramley strides between the desks, reciting in time with the children. Her older sister Mary Jane jabs rhythmically down the multiplication table on the blackboard. Welcome to the Misses Bramley’s academy at 20 Union Street, Leicester.

The new term has just started – a fact announced in the Leicestershire Chronicle and Leicester Mercury with unfailing regularity every January and July, from 1866 until 1871.