As a small boy my father told me of family members who had emigrated to America and Canada; indeed, letters and postcards would arrive periodically from across the Atlantic, causing great excitement. My father also hinted that we had cousins in Australia, but then later denied this. Was there was a skeleton in the cupboard, I wondered? I resolved to investigate.

During a Google search for my paternal grandfather’s name, my grandmother Florence appeared on a family tree of her maiden name. Nothing out of the ordinary there, I thought, but to my astonishment this tree claimed that she had been married to another man before my grandfather and had had a son born in 1909. I rather indignantly contacted the site’s owner and told him that this wasn’t the case. An explosion of e-mails from Australia and America followed, revealing the hidden story of my grandmother’s early years.

With help from my Australian correspondent, I pieced together the story. In rural Somerset in late 1908, Florence conceived a baby out of wedlock. The father – whose identity we shall never know – refused to marry her. Some two years later, Florence married my grandfather and my father was their firstborn in 1912. He remembers playing with a little boy three years his senior – cousin Reg, he was told.

Despite marrying Florence, my grandfather apparently would not accept his stepson into his new and growing family. Young Reg – after time in the care of his maternal grandfather, was handed over to the local Dr Barnardo’s Home at the age of 11. It was the end of our family links with him, until now. 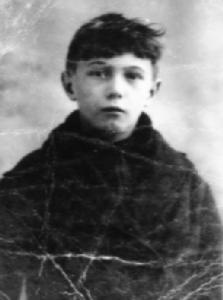 “Life in the home was not a happy experience,” writes Reg’s son “and all through his life the memories of it were with him. There seemed to be a lot he never spoke about.” In 1923 Reg – along with eighteen other boys aged 12-16, was sent to Australia; such enforced emigration is shocking by today’s standards, but as the Barnardo’s website reports, child migration “was born from the idea of offering children an opportunity of a new start in life, in a new country. This was a widely accepted policy at the time, and was supported by both British and overseas governments.” And so Reg sails on the SS Largs Bay, arriving in Sydney on 2nd April 1923 to start a new life in Australia.

My father would have been oblivious to these events. He didn’t discover Reg was in fact his half brother, rather than his cousin, until just before he died and he and Reg never made contact. Oddly enough they died within months of one another in 1992.

I, however, am now in regular contact with Reg’s son, my first cousin in Australia. He has shared his fascinating discoveries about my grandmother’s family and in turn I have been able to supply him with information and photos of the woman he never knew. Most recently, I’ve sent him a more tangible link to his UK family: a silver badge engraved ‘HMS Pembroke, January 1919’ that belonged to our mutual great uncle Herbert. But that, as they say, is another story.