Oh I do like to stroll along the prom, prom, prom

Dig into your collection of old family photos and you’ll probably unearth a few seaside promenade postcards – pictures taken ‘on spec’ by an entrepreneurial photographer who had installed himself in a prime position near the sea front. He’d snap all of the passers-by, hastily scratch a code number on the negative, and hopefully some of the punters would drop by the following day to buy their printed postcards.

These two examples, discovered in among our bundles of family photos, take us back to the 1920s. The locations and dates haven’t been jotted down on the back, so I’m left to speculate about the exact details. In any case, they evoke a sense of Edwardian dapperness. 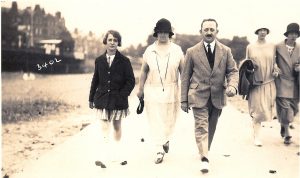 Len and Alice Collis and their daughter Mona stride towards us around 1924-5. Alice in her dropped-waist dress, with dangling pendant and cloche hat, be-suited Len sporting a neat moustache, and young Mona neat in striped skirt and blazer. Only two passing young women detract from the family group. A couple of years later, possibly in Lowestoft, we see (below) Eric Barker, cane in hand, taking in the fresh sea air with his first sweetheart, Edith Ward. Everyday examples, nothing especially remarkable about them, yet they capture joyfully innocent holiday strolls.

The seaside picture postcard first appeared in Britain from the mid 1890s when the Post Office allowed it as a quick, cheap and convenient form of communication. Initially, the sender was only permitted to write the recipient’s address on the reverse and had to rely on the pre-printed message on the front, to convey ‘Greetings from Scarborough’ perhaps. But this restriction was soon relaxed and from 1902 you could add a personalised message, explaining how splendid the hotel was, how favourable the weather and how often you’d braved a swim in the sea.

“These postcards are the considered record of a moment, and all their recipients were known to the senders. Hello. It’s me. It’s us… this is the seafront. We got here. We made it. Don’t you wish you were here?” explains historic postcard expert James Fenton. A scratched reference number (made on the negative via a small window in the camera) and the fact that other holidaymakers are caught within the same shot, underlines the generally un-staged nature of these pictures.

The seaside portrait postcard flourished from about 1900 to 1935. After that, the advent of the Box Brownie and broadening of camera ownership meant that many people could record their own holidays; look through your family collection and you might well find wallets of  small, crinkle-edged snaps from the 1930s and 40s – often with one member of the family missing, hidden behind the camera. Yet it’s the impromptu promenade photos that are often one of the best records of family groups – a snapshot by which to remember your holiday by the coast.