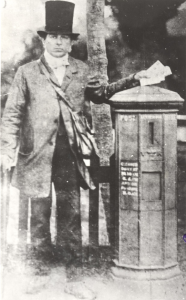 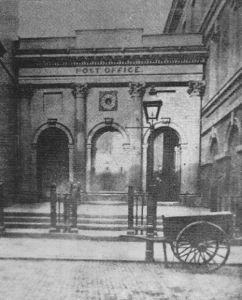 Wearing a top hat and scarlet coat, George Robinson – a letter carrier from the late 1840s – would have been a familiar figure in the Leicester streets. He was amongst the first batch of postmen to be appointed; it was a time of innovation, shortly after the introduction of the penny post, and George would have witnessed the advent of pillar boxes and the growing popularity of Christmas cards. Read his story here: George Robinson the letter carrier

This is the first in our series of occupational histories. Researching an ancestor’s occupation can be a rewarding mini project. Start with the known facts about their working life – maybe a description of their occupation in a census return or a trade directory – and then be resourceful in your investigations.

The George Robinson article, for example, starts with a couple of records on Ancestry – the Post Office appointment book for 1847 and the 1851 census. From there, the story draws upon a broad range of resources, including published works (Rowland Hill’s ‘Post Office Reform’ and John Soer’s booklet ‘The Royal Mail in Leicestershire and Rutland’), a visit to the Royal Mail Archive (www.postalheritage.org.uk) at Mount Pleasant, and snippets from the local newspaper and trade directory. The aim is to get a sense of working life for a postman in the late 1840s and early 1850s. Let us know what you think of it.

To read other articles in our ‘Trading Stories, Working Lives’ series: http://auntiemabel.org/resour…/trading-stories-working-lives